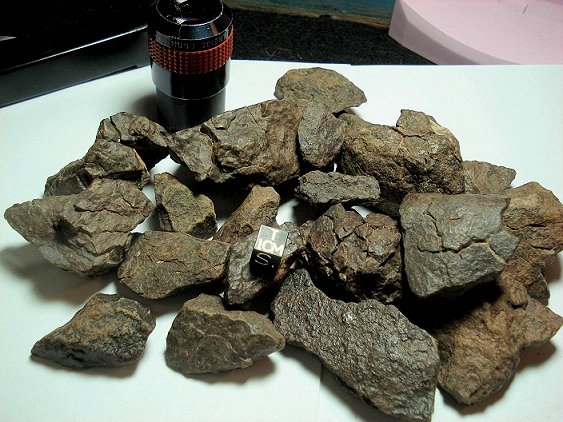 Image : a kilogram lot of unclassified chondrites from the Saharan Desert, shown with an Edmund RKE 28mm eyepiece.

When we look at craters on the moon in our eyepieces, we are seeing the impact sites that launched the lunar meteorites we now have on Earth in our collections. Holding a lunar meteorite is the closest thing we "normal folk" will come to touching the Moon where the Apollo astronauts once walked.

When we are peering at Mars in our scopes, we are looking at the source planet for the Martian meteorites in our collections. Some Martian meteorite types (Nakhlites) show the same intriguing structures seen in the famous NASA "Martian Micro-Fossil Meteorite" (ALH84001). When we hold a Martian meteorite, we are not only holding a piece of Mars, there is a possibility we are holding tiny traces of ancient life from another world.

Astronomer Richard Kowalski found the incoming asteroid 2008TC3 at the Catalina Sky Survey. This asteroid was accurately tracked and predicted to strike the Earth in the remote Sudanese desert of North Africa. The asteroid plummeted to Earth in the predicted area and a shower of rare meteorite fragments was discovered. This meteorite is now called Almahata Sitta and it is the first asteroid in space to be tracked to Earth and recovered. It is a rare type of ureilite meteorite that contains high concentrations of nanodiamonds.

The NASA Dawn probe is now in orbit around the asteroid Vesta, where it is sending back stunning images of the planetoid's surface. Vesta is not only visible in our telescopes, it is also the origin for an entire class of related meteorites called HED group (Howardite, Eucrite, Diogenite). The massive craters visible on the scarred surface of Vesta are the sources of the HED meteorites in our collections. It is possible to hold a piece of the brightest asteroid in the solar system in your hand.

Several other meteorite types have been matched to specific asteroids, and the vast majority of all meteorites originate in the chaotic main asteroid belt between Mars and Jupiter. So the meteorite collector can own a collection of samples from several different parent bodies in our Solar System, including the Moon, Mars, Vesta, and others.

Much is published and discussed about the science of meteorites and their parent body origins, but this only scratches the surface of the overall story. Suffice to say, a lot of hard work, risk, expense, and patience go into finding and recovering meteorites. The best places to find meteorites on Earth also happen to be some of the most remote and hostile environments on the planet, and each meteorite can tell many stories, both scientific and personal. These space rocks are like time-capsule samples from other worlds, and with meteorites we can actually touch the worlds we see in our telescopes.

Thanks for reading and keep looking up!